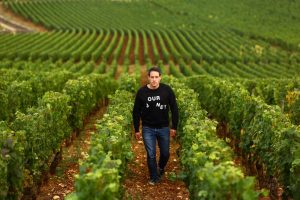 The Chavy family is well established in the Côte de Beaune, with Alain, Jean-Louis and Philippe all making wine in and around Puligny-Montrachet.   Hubert Chavy was married to a Ropiteau, the oldest winemaking family in Meursault.    Hubert had been selling the bulk of his production to the top négociants for many years, but since his son Romaric took over, they are bottling nearly everything they produce at their Domaine Chavy-Chouet.

Romaric started at wine school at the age of 12, before working as an apprentice for his godfather François Mikulski in Meursault.   He followed this with stints working in South Africa, Spain, Greece and the Languedoc before taking over from Hubert at just 22 years of age.   Hubert passed away in early 2014, and has left the legacy in good hands.   He works the vineyards pretty much organically, with ploughing and minimal use of sprays (preferring the traditional copper and sulfur)

Fermentation in steel, followed by 10 months of aging in used 300-600 liter barrels.

Sustainable Farming. A 0.17-hectare plot. Planting density: 10,000 vines per hectare. The vines were planted in 1945 and are oriented due south.

Sustainable Farming. A 0.30-hectare plot. Planting density: 10,000 vines per hectare. The vines were planted in 1945 and are oriented due south