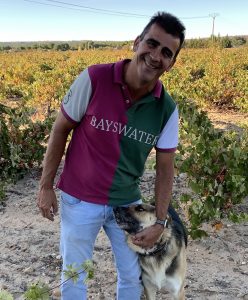 The idea of Maires Winery and Vineyards came up in 2015 when two cousins joined together with the aim of resuming their winemaker ancestors’ activity and thus be present in Toro Appellation of Origin. By the name of MAIRES, a family nickname that goes back to four generation of dedicated to the viticulture, Fernando and Pablo merge their professions with the illusion of carrying out a project that leads to a new way of understanding the wine: viticulture and communication.

Although Toro appellation of origin was created at the end of the 80s, the tradition of the Toro wines has its origin before the Roman settlement, as evidenced by the archaeological remains found in the area. His fame was extended into the Middle Ages when royal privileges were granted for trade. In fact, the wine of Toro even reached the lands of the new world at the hand of Columbus in the discovery of America. For the Maires family, the vineyard has always played a fundamental role in the production of quality wines. Maires vineyards are located in different areas of the Appellation of origin Toro, and have an age that sometimes exceeds 100 years. The perfect orientation of the vines, the composition of the soils and the drainage, create a perfect harmony for the cultivation of the vine. This combination of factors creates a favourable microclimate that enables the production of our high quality wines.

Wire-trained vines with an average age of 25 years (25-50 years) from the very western edge of Toro with predominantly sandy soils. This is the secret of Toro's supple reds.

Hand-picked and harvested by night in small crates follows by sorting the grapes in the winery and pursuing an optimum control process of aroma and polyphenol extraction. Fermentation in controlled temperature for 17 days with three daily pump overs. Aged for 4 months in medium toasted French oak barrels.

Trained in the 'Goblet' form, these head-pruned bush vines have an average age of 30 years (30-60 year old) and hail from the wine-growing boundary of Adalia, in Toro, which is a sandy soil with some pebbles. Low yield around 4000 Kg / Ha.